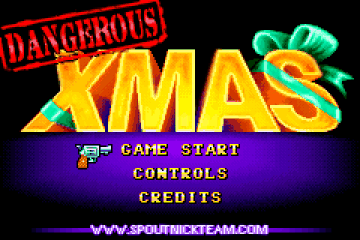 Dangerous Xmas was released by the Spoutnick Team in March 2003, after the untimely death of Rick Dangerous Advance. Presumably, the wait for Christmas 2003 was too long...

Even after only a short session, I can say that this is UNBELIEVABLE. It seems Rick Dangerous III has been canned, so this is the most worthy successor to the original games that I've seen so far. What you'll get in Dangerous Xmas includes:

Or, alternatively, there's an online playable version at www.pascalorama.com/dxao.htm, using an online Game Boy Advance emulator, though they do recommend using a proper emulator and downloading the proper game file for it.

It shouldn't take a genius to work out that I was always going to make a map of this level.
And here it is.

The emulator recommended by the Spoutnick Team is Visual Boy Advance. As this is my first foray into the world of Game Boy Advance emulation, I'd say go with this suggestion. One huge advantage is that there is also a Linux version, so the game will not be denied to the Anti-Windoze League...

Incidentally, here's something I found out later on into my use of Visual Boy Advance. It will run Game Boy and Game Boy Color ROMs as well as Game Boy Advance ROMs (not that I've checked any of these other than Dangerous Xmas), and hence I'd consider it the emulator of choice for all three platforms. Watch your back when the ROM police come calling, though...

Rick Xmas comes with a handy control menu at the start for those who never had the original and could never work out how Rick fired or laid dynamite without the instructions in front of them.

In the Visual Boy Advance emulator, the keyboard controls which substitute for the real keys on a Game Boy Advance are:
CURSOR KEYS = D-pad up, down, left, right
Z = A, X = B (normal fire buttons)
A = L, S = R (finger pads in top of the unit)
RETURN = START, BACKSPACE = SELECT

So the D-pad (cursor keys) controls Rick's movement, and B in conjuction with the D-pad controls Rick dropping dynamite, using the stick, and firing the gun, just as it used to be in the 8-bit and 16-bit machines.

Quick keys for those unable to deal with this include:
L = drop dynamite, R = fire gun, A = jump without climbing (useful if there's a hazard on a ladder).

Obviously, I recommend the "old school" controls, i.e. D-pad in conjunction with B.

START pauses the game, and gamma correction can be adjusted with left and right while paused. SELECT turns the status bar at the top on and off.

On the Visual Boy Advance emulator, SPACE can be used to speed up the frame rate, F12 can be used for a screen shot.

As far as I know, there are no cheat codes, but there is a cheat menu on Visual Boy Advance which may help... as well as a save-game feature. Or, you could look at the map!